Fray Marcos de Niza
A Franciscan priest in search of Cibola, the Seven Cities of Gold, felt he was close when he reached the Ambos Nogales territory. His report on the district promoted a Spanish expedition led by Francisco Vazquez de Coronado in 1540 to lay claim to the cities.

Juan Bautista de Anza
Perhaps Tubac's most famous personality, Anza's second expedition to the Pacific coast departed from Tubac in October 23, 1775. It included approximately 300 soldiers and colonists, and culminated with the founding of San Francisco. 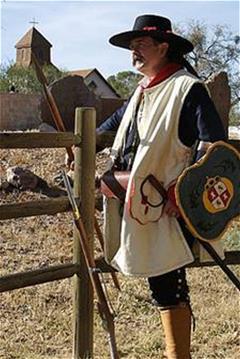 General Francisco "Pancho Villa"
"Pancho" Villa was rumored to have regularly crossed the Nogales border and when he had, would hide in secret rooms or closets in some of the prestigious homes on Crawford Street.

Pete Kitchen
The man who restored order, sort of...in 1853, a former U.S. Cavalry soldier, Pete Kitchen, established a ranch and fortified stronghold 5 miles north of present day Nogales, Sonora along fertile Portrero Creek. He recruited a group of 28 Opata Indians from Sonora Mexico to help build the structures and act as "Kitchen's Army" guarding the area 24 hours a day. Eventually, Kitchen tired of the settled life and sold his ranch. Today it's a restaurant.